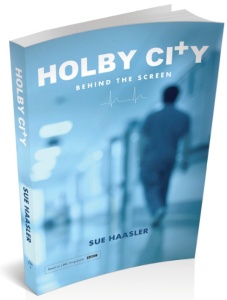 Holby City: Behind the Screen

Go behind the scenes in this access all areas guide to popular BBC TV medical drama Holby City. Find out how the show is made, how story ideas are developed and written, how they make the operations look so realistic, and how long it takes to film an episode.

Meet the people who make the show every week, including producers, writers, designers, nursing advisors, the casting, post-production, costume, make-up and prosthetics teams, and of course the all-important actors. In exclusive interviews the cast reveal how they create their characters and what it’s like to play doctors and nurses for a living.

Available from Amazon (ebook only – the paperback is now out of print); for Nook e-readers; for Kobo e-readers

From June 2009 to October 2016, Holby City reviewed episode-by-episode. All the surgery, scheming, romance and Pulses’ muffins you can consume, in one handy volume. As originally posted on the blog pauseliveaction.com In paperback and ebook